Based on Major Ecological Zones and Traditional Subsistence Lifestyles

Lifestyle and Cultural Practices of Tribal Populations and Risks from Toxic Substances in the Environment. 2002-STAR-J1

This document provides a framework for evaluating risks in Indian Country. Under the paradigm used by the federal government (NRC 1983) human health risk derives from the combination of human exposure to contaminants and the toxicity of the contaminants. In the risk assessment process, contaminant data is gathered to estimate present or future exposures to determine if resources are, or could become, harmful to the health and well-being of a community. 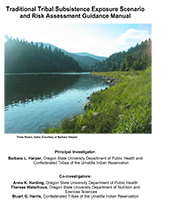 The overall goal of this project was to prepare a set of regional traditional tribal subsistence exposure scenarios that are based on the major ecological zones across the ‘lower 48’ states (excluding Alaska and Hawai’i). These scenarios are needed for CERCLA risk assessments and other environmental standards. Until now, tribes have not had complete exposure scenarios that reflect traditional lifestyles and original natural resource uses, so the risk assessments performed at tribal Superfund sites have inevitably underestimated tribal exposures. Because this grant built on almost ten years of experience in developing exposure scenarios for and with tribes, this grant project served to collect all the lessons learned and distill them into a Tribal Exposure Scenario Guidance Manual.

The specific objectives include:

Objective 1. Select and Convene the Advisory Board.

The first objective was to select and convene an Advisory Board of tribal members or natural resource employees and members from the university community to provide expertise in tribal cultural lifestyles, nutrition, ecology, and activity patterns. The Advisory Board was asked to review and validate the scenarios for cultural and numerical accuracy. In addition, ad hoc members were brought in for their unique expertise.

The Advisory Board was asked to review the overall approach to developing scenarios for the purpose of using them in risk assessment. From our discussions with the Advisory Board, we acknowledged and honored the following conditions and assumptions in conducting our research:

We examined various methods for geographically delineating ecological, language, cultural and historical regional maps. Previous anthropological authors have defined “culture areas” that are similar to EPA/USGS ecological maps, which is logical since the environment and locally available resources shapes culture and survival. For example, the central North America plains region is similar for natural resources (prairie grasslands, buffalo) to the Plains Culture. Indeed, many cultures are designated by their ecoregions (Plains culture, Plateau culture). However, it is important to note that most tribes utilize multiple local ecoregions to ensure year-round resources, so aboriginal use areas frequently encompass multiple habitat types.

After comparing cultural and ecological maps, it became apparent that Level I ecological maps are not detailed enough, and that Level III maps are the best starting point. Some of the ecoregions span several states, and some states have several ecoregions (e.g., mountain and valleys with different vegetation types). Some scenarios are or will need to be at an ecoregion level, some at a state level, and some at a county or other localized level. This will depend on the tribe, the resources, and the application (e.g., at a specific Superfund site.

This task selected and prepared maps for inclusion in the Manual. Several of the sample scenarios include descriptions of the ecology and tribal cultures. While this is frequently done in anthropological studies, the exposure sciences have not used this information before.

Several exposure factors are likely to be generalizable to all tribes, or more accurately to any active outdoor subsistence lifestyle that includes hunting, gathering, fishing, and other environmentally oriented activities. We have identified the inhalation rate, water intake, soil ingestion, and total calories as the exposure factors that fall into this category. As explained further in the Manual, for example, the ratio of high-medium-low-sedentary activities is not likely to vary much (i.e., within the precision boundaries that risk assessment handles) between environments, from tundra to the tropics. Similarly, soil ingestion appears to be similar from deserts to wetlands, with desert dust and wetland sediment roughly analogous. Of course, there is a range of soil ingestion rates among habitat types, and even more among specific activities. However, a general CERCLA risk assessment that requires multi-pathway and multi-contaminant analysis requires a single ‘soil ingestion rate’ input, Therefore, we approached this problem by reviewing all the soil ingestion literature for relevant information, preferably for indigenous populations rather than suburban settings, and selected a rate that is supportable and more relevant to typical reservation situations.

The traditional subsistence food choices include foods that are native to a specific eco-region and/or grown near the dwelling places of particular tribes. Thus, most of the foods contained in a traditional diet will be locally grown, hunted, or gathered. This objective describes several native diets that reflect regional natural resources (at the level of detail that risk assessment equations utilize). This objective was met be reviewing existing ethnohistorical literature supplemented with guidance and input from the Advisory Board members on major resources, seasonal foods, relative proportions of major foods in the whole diet, and the activity level required to obtain those foods. Relative proportions of major foods and routes of exposure are visually displayed in the Manual in several formats.

The regional diets are not the modern USDA food pyramid with substitution of pictures of native foods. Rather, they are the actual diets derived from a review of a wide range of literature. For some ecoregions, the fundamental base of the diet may be fish or buffalo or other protein source. For other regions, a basis of maize or a mix of maize and game can be documented. Few of the resultant food pyramids resemble the modern USDA pyramid.

This task surveyed some unique pathways that need to be further explored as stand-alone exposures or incorporated into the other exposure factors. One example is to further refine the physical aspects of flash evaporation into a confined space at particular sweatlodge temperatures. Another example is gathering materials in wetlands for food or basket weaving, which may occur infrequently, but result in significant exposure during each individual event, particularly due to soil ingestion. A third example is the activity levels associated with traditional tribal activities to complement the CHAD database. Research is underway in these areas.

The third objective was to develop a draft Tribal Exposure Scenario Guidance Manual for use by tribes to modify, refine, and adapt these regional scenarios for their site-specific and/or individual tribal situations.

This task combined the above results into a single Manual. Copies have been provided to EPA, the Advisory Board, and others as requested.

Since CERCLA is basically a risk-based process, tribes have been requesting risk tools that reflect their activity patterns and potential exposures. If a tribal scenario is not available early in the CERCLA process (even before NPL listing), the rest of the process (developing a comprehensive and relevant conceptual site model, defining Nature and Extent, contaminants of concern, screening levels and detection limits, baseline risk assessments, and remedial design) may not be protective of tribal uses. This research prepared model regional tribal exposure scenarios formatted for standard CERCLA risk assessments. They can be progressively modified as site-specific information becomes available.

The Manual has also been provided to EPA to use as current exposure guidance, and methods are updated. The primary technical product of this research has been to develop a process that produces documented and supportable exposure factors that reflect indigenous traditional subsistence lifestyles. Several layers of peer review are built in to the process. The first is to establish an Advisory Board for the grant work (and for each additional scenario that is developed). Additional academic and cultural expertise was involved in identifying the appropriate points during the literature identification and interpretation. As a living document, feedback is continually sought and revisions will be made on the web version.

Quality assurance and correctness of the scenarios involved continuously checking results against the entire range of literature and with tribal cultural experts. We believe that “accuracy” derives more from completeness than from precision on single parameters while omitting others. For example, a calorically complete diet composed of documented dietary staples is more accurate than a detailed catalog of edible species that omits nutritional analysis or fails to account for total needed calories. Some parameters (e.g., inhalation rate) are the subject of further research.

This research represents a significant step forward in rectifying the disparity in protecting human health between suburban lifestyles (with a wealth of exposure science data) and indigenous communities (with almost no lifestyle-specific multi-pathway data). While individual exposure pathways are studied in indigenous setting, no complete exposure scenarios have been available. This means that risks to indigenous communities from environmental contaminants have not been fully and adequately characterized. Without this risk basis, remedial goals or environmental standards cannot protect peoples who have much more intense environmental contact.

Environmental justice is also improved by giving tribes the same safety margin in their exposure scenarios as suburban communities have enjoyed for the last 30 years. The conventional approach to risk reduction and human health is to provide a moderate level of protection (typically geared toward average suburban exposures), and expect individuals or communities with additional exposure pathways to be responsible for reducing the rest of the risk. For example, a Superfund site might be cleaned up to suburban levels with an advisory against additional resource use. This burden typically falls on communities that are already at risk from degraded resources, with the imposed choice between harming their culture or endangering their health.

Harris, S., Harper, B., Donatuto, J., and Harding, A. (2006). Impacts to Tribal health and culture of mercury and other contaminants in Columbia Basin fish. Presentation at Mercury 2006: Conference on Mercury as a Global Pollutant; Toward Integration of Science, Policy, and Socioeconomics. Madison, WI. August 6-11, 2006.

‹ Program 2 | The WAVE~Ripples for Change up Sprout ›