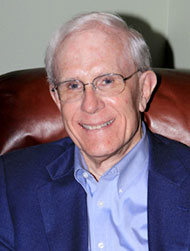 Glen H. Elder Jr., author of “Children of the Great Depression,” will share the story of his career and how his work has contributed to the flourishing field of life course studies.

Over nearly five decades, Glen H. Elder Jr. has studied the lives of individuals and their birth cohorts across the 20th century, with emphasis on Americans who were born in the 1920s, grew up in Depression times, and were later mobilized into World War II. Out of this work has emerged a perspective on lives in changing times and a way of using longitudinal data to investigate them. In this lecture , Elder tells the story of his career, its chance events and turning points, and notes how this work has contributed to the now flourishing field of life course studies.

Elder has also served on the faculties of the University of California at Berkeley and Cornell University. A member of the American Academy of Arts and Sciences, he has served as Vice-President of the American Sociological Association and as President of the Society for Research on Child Development. His books (authored, co-authored, edited)  include Children of the Great Depression (1974;1999, expanded 25th anniversary edition), Life Course Dynamics (1985), Children in Time and Place (1993), Developmental Science (1996); Children of the Land: Adversity and Success (2000); and the Craft of Life Course Research (2009).