The College of Public Health and Human Sciences has established a formal partnership with the National Institute for Occupational Safety and Health’s Center for Maritime Safety and Health Studies to work together to improve safety and health conditions in maritime workplaces in the United States.

The college’s researchers will work with the federal agency, which falls under the umbrella of the Centers for Disease Control, to study and address occupational and safety issues in the maritime industry; turn research results into practice to prevent workplace injuries; and share their findings with other researchers and within the industry.

Read more about the impact of this partnership

Grad takes passion for occupational and environmental health to CDC 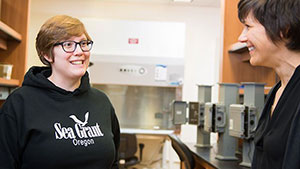 As a PhD student in the CPHHS, Laura focused her research on workers’ safety and health. During the last two years, she worked as a graduate research assistant with Assistant Professor Laurel Kincl and has been part of teams studying high-risk industries in the Pacific Northwest and Alaska, including the commercial fishing industry.

Laura is currently completing her dissertation while working with the Centers for Disease Control and Prevention in Anchorage, Alaska. “For my dissertation, I’ll be investigating Alaskan seafood processors’ safety and health,” she says. “My hope is to engage stakeholders in industry and government to identify practical strategies for preventing occupational injuries and illnesses.

Read more about Laura and her work 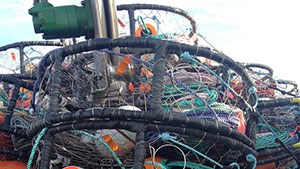 Commercial Dungeness crab fishing on the West Coast is one of the highest risk occupations in the United States, based on fatalityrates. But non-fatal injuries in the fishery appear to go largely unreported, a new study from Oregon State University shows.

While the fatality rates in the Dungeness crab fleet have been reported in the past, the incidence of non-fatal injuries have not been previously studied, said Laurel Kincl, an assistant professor of environmental and occupational health and safety in the OSU College of Public Health and Human Sciences.

Kincl and a team of researchers examined 12 years of death and injury data, and found that 28 people died while commercially fishing for Dungeness crab from 2002-2014. In that same period, 45 injuries were reported to the U.S. Coast Guard.

Inside the mind of researcher Laurel Kincl 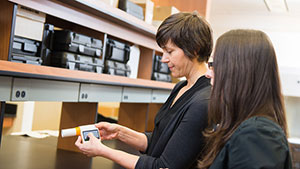 “The goal is to prevent illness and injury in the populations I work with and to create safe and healthy workplaces and environments. My hope is that by engaging the populations in the process of understanding the hazards and developing prevention strategies, we are successful.”

Read: Inside the mind of researcher Laurel Kincl 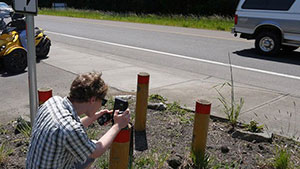 Philomath supports a relatively small population and is set in a rural, forested location. But the frequent bustling of logging trucks and daily activity at local sawmills has some residents concerned about air quality. 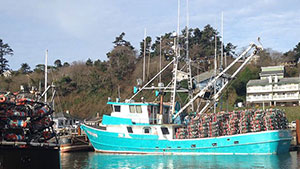 Tracking the WindPublic ExposureTogether, Oregon State and community researchers are joining forces with commercial crabbers to develop injury prevention efforts so the latter can stay safe on the job.

Researchers in Oregon State’s Environmental Health Sciences Center have developed a sampling approach that tracks chemicals with extreme sensitivity. In a lab led by Kim Anderson, professor of Environmental and Molecular Toxicology, scientists specialize in what are called “passive samplers.” Over the last two decades, Anderson’s group has deployed more than 19,000 such monitors that collect chemicals in air and water for measurement in her lab.