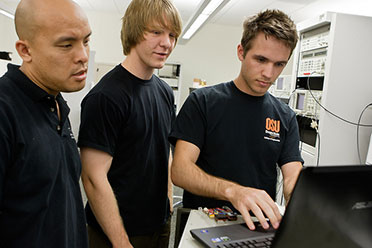 Dr. Patrick Chiang is an assistant professor in the Department of Electrical and Computer Engineering at Oregon State University.  He received the BS in electrical engineering from University of California, Berkeley in 1998 and hisPhD degree from Stanford University in 2007.  Since fall 2006, he has been at OSU where he directs the VLSI (Very Large Scale Integration) Research Group.  Prior to joining OSU, he was involved with several semiconductor startups in Silicon Valley.  In 2006, he was a visiting NSF researcher at Tsinghua University, China, working on adaptive wireless collaborating on energy-efficient UWB transceivers.  He is currently a senior visiting researcher at Fudan University, China, collaborating on energy-efficient UWB transceivers. He is the 2010 recipient of the Department of Energy Early CAREER award for the project entitled “Sustainable Silicon:Energy–Efficient VLSI Interconnect for Extreme-Scale Computing”.

While at first glance it might seem that these two goals are unrelated, it turns out that one of the most critical requirements for future medical sensors is low power consumption.  For example, implantable wireless pacemakers, insulin pumps, and Parkinson’s neurostimulators need to monitor organ vital signs in the body for 5-10 years, placing important requirements on the battery life.  Non-invasive health monitoring, such as wearable sensors for measuring heart rate, pulse oximetry, or movement,  will need to consider energy consumption in order to reduce battery size and total sensor cost.  In all of these applications, the movement of data around (for example, between wired chips or through wireless communications) is the dominant source of power consumption – typically more than 90% of the total system power.  Hence, the design of energy-efficient communications at multiple levels is tantamount to achieving both of these research goals.

1) Wireless tracking and localization of indoor-3D movement of elderly in their homes (with Huaping Liu (OSU); ORCATECH at OHSU)

The goal of this work is to monitor the 3D movement patterns (to less than a foot resolution) of elderly as they move around their homes.  With a small wireless transceiver, preliminary data shows the ability to achieve 6-10cm distance resolution of two patients walking within their home.  This movement tracking technology may enable early diagnosis of dementia, which is highly correlated with walking patterns, as well as continuous safety monitoring such as acute falls.

2) Wireless, non-invasive brain-computer interfaces for the continuous monitoring of neurological diseases (with Electrical Geodesics in Eugene)

Non-invasive monitoring of brain function and health is important for understanding neurological diseases such as depression, stroke, epilepsy, as well as many others.  Conventional brain imaging techniques have been limited to bulky, inaccurate, expensive hardware that has changed minimally over the past 30 years.  Due to recent advances in semiconductor technology (for example, giving us modern cell phones and consumer electronics), it is now possible to build low-cost, wireless, brain imaging interfaces that are massively integrated into a single microchip.  Using off-the-shelf components, we have built a 1st generation prototype the size of the quarter that can monitor a patient’s single EEG channel.  We are currently working on a next-generation microchip that incorporates hundreds of channels of brain sensors, performs local compression computation, and wirelessly transmits the data for further analysis.  With the proposed technology, it will then be possible to monitor and analyze brain behavior at one’s home – eliminating costly hospital visits and the associated infrequent neurological assessments that can lead to poor diagnosis.