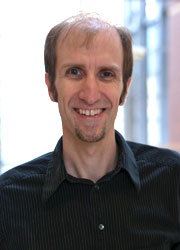 Mike Pavol is an Assistant Professor in the Department of Nutrition and Exercise Sciences. He began working at OSU in September of 2002. Previously, he was a Post-doctoral Research Associate in the Department of Physical Therapy at the University of Illinois at Chicago. He received his Ph.D. in Biomedical Engineering from the Ohio State University. Dr. Pavol describes his research below.

One of my main research interests is in preventing falls by older adults. In particular, I want to understand the factors that cause a person to fall from a loss of balance. To study this, we put young and older adults in a safety harness and make them trip or slip while performing different tasks. We film and analyze the reactions that people use in trying to regain their balance, comparing those who recover to those who “fall” into the harness. Our findings suggest that fallers, both young and older, tend to “collapse” more than step following an unexpected loss of balance. However, with repeated exposure to the same slip, both young and older adults can quickly learn how not to fall. We are now studying whether people can learn how not to fall when they can’t predict the direction in which they will slip. We are also using computer models to study how muscle weakness might affect a person’s ability to recover from a loss of balance. These research efforts may lead to new and more effective training interventions for preventing falls.

My other main research interest is in reducing the risk of injury in transferring a traveler with disabilities between a wheelchair and a seat or toilet on board an airplane. We are studying how different factors affect both the risk of low back injury to the transferors and the amount of force acting on the traveler. Factors being considered include the size of the traveler, the effect of reaching around or over the airplane seats, and the use of assistive devices. We are also determining how much space is needed in an aircraft lavatory in order to safely transfer a traveler with disabilities between a wheelchair and the toilet. Our goal is to make air travel by people with disabilities safer and more accessible.