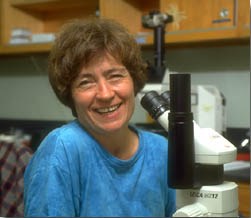 Jaga Giebultowicz is an Professor in the Department of Integrative Biology and a faculty member in the Center for Genome Research and Biocomputing. Dr. Giebultowicz received her Ph.D. in 1981 from the University of Warsaw. She has been at OSU since 1995. Previously, she was a researcher at the USDA Insect Neurobiology and Hormone Laboratory and an Assistant Professor at the University of Maryland, College Park. She is the Principal Investigator of “Analysis of clock proteins in their non-circadian roles”, a study funded by National Institute of General Medical Sciences.

My research focus is chronobiology which is an interdisciplinary field aimed to understand the mechanisms and functional significance of biological timing. All living organisms, from bacteria to humans, display daily (circadian) rhythms, which synchronize life functions with environmental day/night cycles. These rhythms persist in constant conditions with near 24-hour period. The powerful nature of daily rhythms, such as wake and sleep cycle, is revealed to any student who tries to study late into the night without falling asleep!

Circadian rhythms are controlled by molecular oscillators (clocks) formed by a network of clock genes, which are conserved from insects to humans. My research uses Drosophila and other insects as models to investigate clock genes, and their functional and adaptive significance. We have shown that the circadian clock plays an important role in reproduction including sperm and oocyte maturation. We are also currently elucidating the links between circadian clock and the susceptibility to pesticides and other toxins. It appears that circadian clocks play important roles in organism detoxification.

I am interested in collaborating with other researchers and I invite graduates and undergraduates to get involved in our projects. Interested individuals are encouraged to contact me.