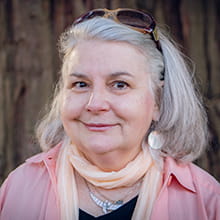 Carolyn Aldwin is a Professor of Human Development and Family Sciences. She received her doctorate in adult development and aging from the University of California at San Francisco, and was a post-doctoral scholar at UC Irvine. Previously she was a professor at the UC Davis. She studies how psychosocial factors affect health, especially in later life, authoring over 90 articles and chapters, and has authored or edited three books on stress, coping, health, and optimal aging.

My research has focused on two paradoxes in stress, coping, and aging research. First, older adults are widely assumed to face a number of stressful conditions, including losses of family and friends, work roles, and physical functioning. Surprisingly, on standard measures of stress, older adults report fewer stressful life events than middle-aged or younger adults. However, these inventories typically measure events which are more likely to occur to younger adults, such as marriage and divorce, being laid off, and being jailed. I developed an age-appropriate stress measure which assesses events that are more likely to occur in middle and late life, and found that the number of major stressors shows little or no age-related decline. However, older adults are less still less likely to report daily stressors than middle-aged or younger adults. The second phase of this research examined whether there were systematic differences in coping with age which might account for decreased reports of stress. My colleagues and I have shown that, in the absence of dementia, older adults were just as effective copers as were younger adults, but may also be more efficient. In other words, older adults conserve resources by expending less energy, using fewer strategies but still handling problems just as effectively as younger adults. More recent research focused on appraisal. Older adults are simply less likely to appraise situations as problems. In part this is due to a change in stressors, from episodic to chronic. As long as chronic problems such as hypertension or diabetes are adequately managed, they are simply not perceived as stressors per se. Further, older adults are physiologically more vulnerable to stress, and thus may avoid or discount problems in order to avoid getting upset and exacerbating health problems. Finally, older adults may have better perspectives - having gone through major stressors and trauma, more minor problems may seem less important. As one respondent remarked, watching his daughter die of cancer made everyday problems fade into insignificance.

The second paradox concerns the positive aspects of stress. While stress clearly has adverse effects on health, many people report positive long-term outcomes, such as increases in mastery and coping skills, better relationships with loved ones, shifts in values and perspectives, and heightened spirituality. In multiple samples, my research shows that many people report complex patterns of both positive and negative effects of stress; however, if they can report positive aspects of even traumatic stress such as combat exposure or the 9/11 attack on the World Trade Center, they are less likely to report long-term negative effects such as post-traumatic stress disorder (PTSD) symptoms.

In other words, stress is ubiquitous. How people learn to cope with stress throughout life, and the extent to which they can derive positive meaning from facing stressors, may be more important for their well-being than simple exposure to stress.